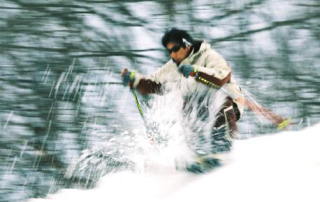 Thank you very much for reading this.
I have been in love with skiing most of my life and it is my desire to spread this wonderful sport worldwide.
By the way, I have also loved classical music all through my life.
If I could have another life, I would like to be a pianist. Hopefully in my next life.

I have been very active in many sports from a very young age, and I am still a competitive swimmer, and a trampolinist.
The following part of this page explains more about myself.

When I was young, I strongly resisted accepting anything Japanese. I could say that I hated the Japanese way of thinking and feeling. For example, I hated old Japanese literature. I disliked the persons who appear in those old Japanese novels. I could not share the values, ideas or thoughts with those people in old Japanese books.
I rather liked Chinese classical literature and I liked the Greek mythology the best.

I was perfectly suited to the program enforced upon the Japanese by the American government after the Second World War. War Guilt Programs. They tried to brain-wash and weaken Japanese minds. I believe that they succeeded in my case until I studied history in a deep and concentrated way.

In my teens my mind was strongly influenced, and dramatically molded by the Beethoven's music. Then shortly after, Herman Hesse's literature. Those two had the biggest influence over my mind. They still have great power over me, and they still are the precious treasures of mine.
Their influence created me a real person, a person who can think.
I then began to think not as a victim of the American War Guilt Programs, but as a Japanese, who was born in 1955.

I have listened so much music, and have read so much literature.
In addition to music and literature, two other strong influences over my mind and life have been swimming and skiing, and I gave my best to both.
Skiing became my profession, and swimming became the conditioning tool to maintain my fitness and health. Plus I become Champion swimmer in my age group.

Looking back on my life, I enthusiastically idolized the western way of thinking and its concepts till 40 years old.
Then gradually I became inclined towards the old Japanese way of grasping the universe.
One of the reason for this home coming was that I reread Taisetsu Suzuki's books. Another reason was reading Inazo Nitobe's book 'Bushido'. I found it ironical that both Suzuki and Nitobe's books were written in English in order to be read by English speaking people.
I also found it ironical that there are, even now, many English speaking people who read their books and place a high value on them.
In addition to those ironical facts, the Japanese, who made me noticed old Japanese value, were my ralatives in California. They were actually Americans even then. They experienced concentration camps during Second World War.
It may be true that It was not western people but us Japanese who forgot the value of our own.
Many of my north American friends have read those books and love the ideas of Suzuki and Nitobe. It may be us, Japanese, who have changed, or have been changed.
I have found there to be so many valuable things in our own roots.
I would like to seek those valuable things in Japan that have been buried and covered, and make them recognized and give them real lives again. I believe they are needed more than ever in this world and in our history.
Old Japanese economical thoughts, beliefs, and our way to live in harmony with nature are desperately needed by the earth now.

My experiences through skiing, swimming, classic music and literature brought me to think this way.

Thank you very much for reading this.

The Ski Lessons of